Sunday at church a song was sung that has been stuck in my head ever since.  I say “it was sung” instead of “we sang,” because both Scott and I found ourselves unable to sing it.  We were not familiar with the song so we were particularly attentive to the words.  It repeatedly said about God, “You are good, good” followed by repeatedly saying “You’re never gonna let me down.”  After several choruses of “you’re never gonna let me down” I leaned over to Scott to ask him what exactly he thought it meant.  Perhaps the song is written by someone much younger than us and the meaning of that phrase has changed, but for us, “never gonna let me down” means I will never be disappointed.  Similarly, Macmillan Dictionary defines “let down” as “to make someone disappointed by not doing something that they are expecting you to do.”  In the songwriter’s defense, maybe he or she meant God will never forsake us, which is, of course, true.

As I’ve thought about those lyrics from that song I’ve been reminded of how we as believers frequently report good news and follow it by a euphoric exclamation of, “God is good!”  For years, long before Sarah’s departure, I’ve been bothered by stating the truth “God is good,” in the context of good things happening to us.  Linking good circumstances with a statement of God’s goodness seems to beg the questions, what if it had not been good news?  Would God still be good, then?  Certainly those good circumstances are blessings of God, but if they are the evidence of God’s goodness, what are the terrible circumstances evidence of?  I’ve often wished we instead reserved the statement “God is good” as a battlecry for the wounded rather than an “amen” to everything that goes our way.

The reality is God didn’t just let our family down.   Disappointing us or letting us down sounds far too mild.  Instead, in the blink of an eye He allowed our family to plummet into a deep, dark, unimaginably painful pit.  We had bathed our precious child in prayer, pleading for her safety.  I had wrestled with putting her on that bus that morning and had prayerfully gone through the process of entrusting her to Him and His providential care as I allowed her to walk up those steps.   I absolutely was hopefully expecting him to honor those prayers to keep her safe, and I was wretchedly, horribly, excruciatingly disappointed.

Our family identifies with Paul.  Our good God has allowed us to be afflicted, perplexed, persecuted, and struck down, and we bear “great sorrow and unceasing grief” in our hearts. (2 Cor. 4:8-9; Rom. 9:2).  Our good God absolutely allows His children to be let down, disappointed, wounded, broken, grieved, persecuted and even killed.  He told us in His Word that He would.  He repeatedly warns us we live in a fallen world, and that we have an enemy who has come to steal, kill and destroy (John 10:10).  He warns us that we will endure fiery trials (1 Peter 4:12).  And if that’s not clear enough, He tells us, “Indeed, all who desire to live godly in Christ Jesus will be persecuted” (2 Tim. 3:12).

His goodness is completely independent of our circumstances.  His goodness is not contingent on health, wealth or prosperity.  His goodness is not compromised by tribulation or suffering.  To the contrary, His goodness is most powerfully experienced and displayed when He, our mighty Deliverer, plunges into the pit with us (Psalm 40).  He is faithful to be there with us, as the mire of heartbreak and agony press in tight and we struggle to breathe, He upholds us by His righteous right hand (Isa. 41:10).  Though the waters rise, He will not allow us to be completely overtaken (Psalm 69).  In the midst of our pain and suffering His sustaining grace is poured out enabling us to persevere and testify, “we are afflicted in every way, but not crushed; perplexed, but not despairing; persecuted, but not forsaken; struck down, but not destroyed“ (2 Cor. 4:8-9).

Some have mocked our faith since the accident, presuming out of finite imagination that a good god would only allow good circumstances and would never allow us to be let down or disappointed in such a way as we have suffered.  Such a view fails to take into account the totality of scripture and the fact that this life is not the focus, it is but a flicker.  When we look with earthly eyes at the painful circumstances of this temporal life there seems no option but hopelessness and despair.  However, when we view the struggles of this life through the lens of scripture and eternality, God’s goodness is clearly revealed.  “After you have suffered for a little while, the God of all grace, who called you to His eternal glory in Christ, will Himself perfect, confirm, strengthen and establish you” (1Pe 5:10 NASB).  “Therefore we do not lose heart, but though our outer man is decaying, yet our inner man is being renewed day by day.  For momentary, light affliction is producing for us an eternal weight of glory far beyond all comparison, while we look not at the things which are seen, but at the things which are not seen; for the things which are seen are temporal, but the things which are not seen are eternal.”  (2 Cor. 4:16-18 NASB).

For most of us there will come a day when the mountain before us is not moved, the flood is not diverted or the flames are not quenched.  When that day comes we can persevere knowing that, though the path before us is unspeakably hard, we do not go alone.  Our good God was not absent or unaware the day Sarah died.  He did not abandon us or forsake us.  The mountain was not moved, the flood was not diverted and the flames were not quenched for our family on June 8th, 2017.  Even so, we still testify, shouting the battlecry of the wounded, “God is good!” 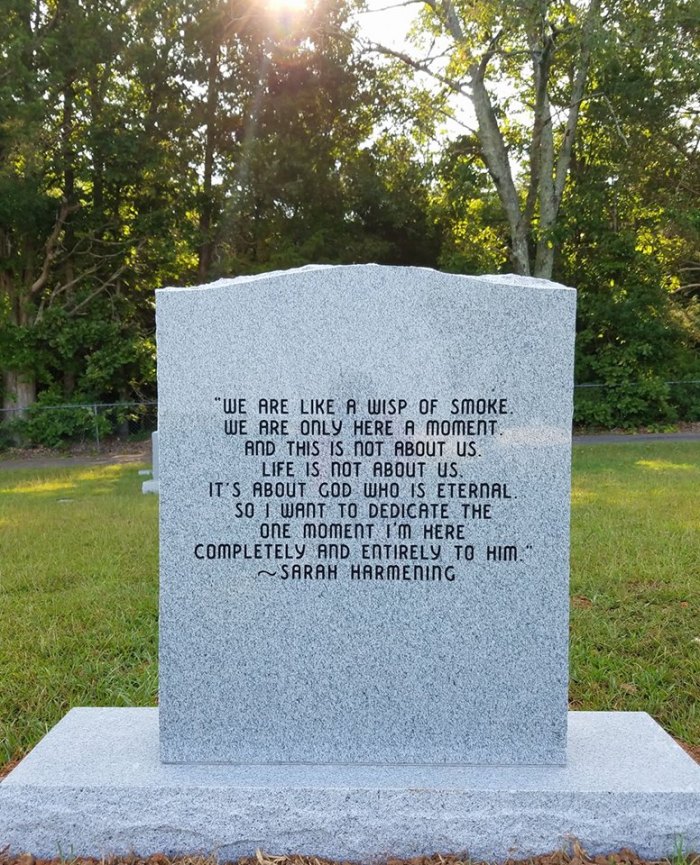